While Paul shared the same inner struggles Christians face, he was delivered from them. Why are so many Christians still struggling?

NOT I BUT CHRIST
Part 2 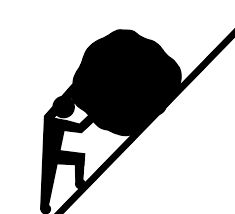 In the first article in this series I expressed my belief that most Christians have failed to utilize the great power of the gospel because they have embraced only half of it. We get the “forgiven of our sins” part, but we have failed miserably to understand and live out the “united with Christ in His death, burial and resurrection” part. We thanked Jesus when He saved us, but we sealed our fate when we subconsciously thought I’ve got it from here. We knew salvation was a free gift, but becoming a good, righteous Christian would take time and serious effort. We were sure that if we studied our Bible, prayed, and got involved in some ministry we would eventually get there. Years later we rationalize our continuing struggle with the conviction that we’re a work in progress, but thankfully, Jesus is always there to help us. Right? Wrong? We don’t need Jesus’ help. We need His life.

Paul expressed the same frustration in Romans 7 where he recounts a time in his life when what he did never matched what he knew he should or shouldn’t do, and it was driving him crazy. As with us, his attempts to measure up were falling flat. Although he had been saved, the old temptations were still there, and he was still powerless against them. He understood that Christ had died for his sins, but he had not yet learned the rest of the gospel which he would later preach. Through heavenly revelations, God taught him that what Christ endured on the cross wasn’t just so that believers in Him could be forgiven of their sins. It was also about deliverance from the power of sin itself. Only after he had embraced God’s revealed plan for deliverance did he find victory and an end to his struggles. What I am writing in this series is a direct result of what Paul learned, how it has changed my life, and how you, too, can be set free.

In Romans 7, Paul was at the same place where most Christians remain today, never learning of the truth that would set them free (John 8:32). You may be thinking that all this is old news. You may have been taught these identification principles. Maybe you’ve actually taught them. Both were true of me. Then God took me deeper into what it really meant and I realized that all I had known was how to explain the concept. Living it out was a different matter altogether. As my journey began, I found great comfort in the knowledge that there was more than what I was currently experiencing. I found even greater comfort in the realization that the great apostle Paul struggled with the same things that confound us. (Your answers to the quiz reveal if you’ve really grasped these principles.)

In the first 14 verses, Paul’s point is that death ends a relationship and sets one free to enter into a new relationship. The Jews were made dead to the Law so they could enter into a relationship with the one to whom the Law pointed-Jesus Christ. Gentiles have been made dead to legalism (self-effort) so they, too, could be united to Christ. Neither Jew nor Gentile could bear fruit for God until they had been made dead to their former master, sin, which attained its power through the Law (for the Jew) or through legalism (for the Gentile).

With verse 15 Paul begins his discussion of his past struggle before he learned of the presence of two opposing powers within him: indwelling sin and the Holy Spirit. This changed everything for him. Until he realized that sin indwelled him, he (like most Christians today) thought that he himself was responsible for his evil thoughts and actions. He expected much more from himself since his encounter with the risen Christ. He assumed that since he had become a bondservant of Christ, his devotion would be evidenced by pure thought and actions. This wasn’t happening and he couldn’t understand why. Once he realized the source of the problem wasn’t him, but sin that was living within him, he felt better…for a while.

Then he faced a new frustration. Despite his valiant attempts to defeat the sin within him, it always won. He quickly realized that he was powerless against it. He needed deliverance from the outside. That’s when he learned that God had, indeed, brought the deliverance he so desperately needed. God had provided the Holy Spirit to indwell him. The third person of the Trinity would bring the life of the risen Christ to be Paul’s new “life source.” Christ would become his life.

Next week we’ll continue to follow Paul’s revelations. For now, compare Paul’s struggles with yours. Be honest with yourself. If you think you’ve progressed beyond where Paul was, think again. Is God using you to accomplish greater things than Jesus did (John 14:12)? We have set the bar so low that we have concluded that our version of Christianity must be as good as it gets. Once again, there’s more, a lot more and it’s awesome. Stay tuned.

I’m reading a book on anti-gravity. I can’t put it down.