Putting on our spiritual armor is all about putting on Christ.

TAKE IT TO THE ENEMY
PART 5 Put on What is Christ

In Ephesians 6:10-18 Paul exhorts us to be strong and ready to engage the enemy. In these nine verses Paul is saying that to be successful in battle, we must learn to put on what is Christ. We are to be strong in the Lord, and in the strength of His might (not ours). We do this by daily putting on the armor of Christ, which is to put on Christ. As we put on Christ and His armor every morning, His might and His strength are available to us, but we must choose to put Him on.

We have already received our marching orders in the epistles of Paul, God’s chosen Apostle to the Church. Our responsibility is to know the Word so well that when a situation arises, we will instantly know what to do or where to find the answer. Often, the attack doesn’t come from the outside. It comes in our thought life. Satan is adept at planting thoughts of doubt and insecurity. Too often, he knows our weak spots better than we do.

Since we are in a war with demonic beings, we must be keenly aware that Satan and his demons are experts at deception, and they love to inject their deception into our thought lives.

The Rulers have been Disarmed

In spite of this, we can find great comfort knowing that everything has been created by, through, and for Christ, including things in the invisible world, whether thrones or dominions, rulers, or authorities (Col. 1:16). This means that even the demons are subject to Christ (Luke 10:17). It’s even more comforting to know that Christ’s victory at the cross included disarming the rulers and authorities of this demonic realm and making a public display of them (Col. 2:15). Think of what this means. The rulers of our enemy have no armor! Everything they try to inflict on us is from their arsenal of lies, deception, and intimidation. This is why we must guard our thought life, for this is where many of the battles take place. 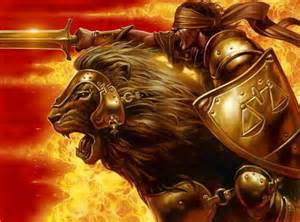 Since we are fighting invisible wars, we must understand the reality of what we cannot see, and the reality should encourage us. Not only have the enemy’s rulers been disarmed, but there is a host of God’s angelic warriors ready to do battle on our behalf. In 2 Kings 6:8-18 we find the prophet Elisha and his servant Gehazi hiding out in the city of Dothan. Early in the morning, Gehazi awakens to see a massive army of soldiers on horses and in chariots surrounding the city and ready to attack.

Freaking out, Gehazi asks Elisha, “What do we do now?” The prophet calmly replies, “Stop worrying, for those who are with us are more than those who are with them.” Then Elisha prayed that God would open his servant’s eyes so he could see into the invisible world. Suddenly, Gehazi saw that the mountain was full of God’s angelic warriors on horseback and chariots of fire all around Elisha. Then Elisha prayed and God struck the enemy with blindness. We can only imagine the slaughter that followed. Until Elisha prayed, Gehazi couldn’t see what really mattered. May God open our eyes so we too can see what matters. We are to walk (and fight our battles) by faith, not by sight, so spiritual vision is absolutely necessary.

We are Fully Equipped

You may think that your situation is different because Elisha was a prophet of God with supernatural powers, and you’re just you. This foolish thinking denies the fact that putting on the armor is putting on Christ. If you have died and been raised with Christ, then Christ’s life has become your life. The armor is Christ and the life within the armor is Christ. Is Christ not infinitely more powerful and gifted than Elisha? Now what’s your excuse? Our attitude should be one of a super-confident warrior covered with the best armor, empowered by the all-powerful creator of the universe going up against an enemy whose rules have been disarmed. We have been fully equipped to disrupt the kingdom of darkness, so what are we waiting for?

Next week we’ll look closely at our armor and how to use it.

You can lead a horse to drink, but you can’t make it water.