1191. Our Adversity Can Benefit Others

No one loves adversity, but when God uses it to bless others, we gain a new perspective and appreciation for it.

Our Adversity Can Benefit Others 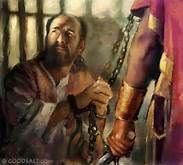 An incident in the life of the Apostle Paul shows that sometimes God places us in some tough situations so He can bless others. This adds another dimension to the adversity God takes us through. Like everything else in life, it’s not always about us, and the sooner we understand this the sooner we’ll be able to see our tough situations through God’s eyes.

The lesson from Paul’s life is found in Acts 16:11-40. Paul, Silas, Luke had concluded a fruitful time of ministry at Philippi. They were on their way to the local place of prayer when a demon-possessed slave girl started following them around crying out, “These men are bond-servants of the Most High God, who are proclaiming to you the way of salvation.” Despite the truth of her proclamations, she was annoying Paul so much that he commanded the evil spirit (of divination) to come out of her. With the spirit gone, she lost her lucrative fortune-telling capabilities, and her masters had just lost their cash cow.

They seized Paul and Silas, dragged them into the marketplace, and threw them at the feet of the chief magistrates, claiming that these Jews had been throwing their city into confusion by proclaiming customs considered unlawful for the city’s Roman residents. They got the crowd so worked up that the magistrates tore their robes and ordered Paul and Silas to be beaten with rods. After a severe beating, they were thrown into prison with the command that they be guarded securely. This caused them to be taken into the dark and damp inner prison where their feet were placed in stocks.

Keep in mind that Paul and Silas were Roman citizens. As such, everything that had just happened to them was illegal. Everything about their treatment was unjust and unfair. But instead of whining, complaining, or protesting, these two men of God were praying, singing and praising God as the other prisoners listened, prob ably with great curiosity. Both of God’s men knew that opposition would come here as it had before. Yet, God had proven Himself faithful. He had not only delivered them through their trials, but had used their tough times to further the gospel. They knew that every apparent setback was actually part of God’s plan to accomplish something way beyond anything they could imagine. They knew their present situation was no different.

In the middle of their two-man worship service, an earthquake rattled the rock-carved prison to the degree that all the doors flew open and every prisoner’s chains became unfastened. God was at it again. Thinking that the prisoners had escaped, the jailer was ready to kill himself when Paul assured him that all the prisoners were still there. Imagine what must have been going through his mind. A double miracle has just transpired. The prisoners had been given an opportunity to escape (a miracle for them). But they were still there (a miracle for him). He had to be confronted with the truth that the God of Paul and Silas was the true God. It was decision time. His life had just been spared. It was decision time. Falling down at the feet of God’s choice servants, he asks, “What must I do to be saved?”

The result of this seemingly unjust episode in the life of two of God’s servants was the salvation of the jailer and his whole family. This is what their ministry was all about, and God knew the best ways to bring light and life to those in darkness. What Paul and Silas experienced was all according to the script God had written long ago. It was all part of His plan.

Scripture never tells us what happened to the other prisoners. It’s likely that they were changed by the events of that night. They had been watching and listening to the two men of God who had stirred up the whole city. They saw and heard a different reaction than they expected. The they were faced with the reality that while these men praised their God while they were in stock in a Roman prison, their God answered opening the doors and unfastening the chains of all the prisoners.

Perhaps they understood the clear message-that their God desired to set all the captives free. So, why didn’t they escape when they had the chance? Perhaps they were so impressed with Paul and Silas that they did whatever they did or simply followed their instructions. Who wouldn’t listen to someone who acted with such confidence in their God?Then there’s the issue of dealing with the injustice of it all. Peter summed it up when he wrote, “For this finds favor if for the sake of conscience toward God a man bears up under sorrows when suffering unjustly” (1 Peter 2:19).A few verses later, Peter writes, “For you have been called for this purpose since Christ also suffered for you, leaving you an example for you to follow in His steps” (v. 21).

The response of God’s two servants to the injustice done to them clearly found favor with God. In the end, they were not only vindicated, but they had gained the upper hand. Perhaps the other prisoners heard about this, further elevating the God of Israel in their estimation. This side of heaven we’ll never know if these guilty prisoners found physical or spiritual freedom from what they witnessed. What we can know is that God wants to use us to bring blessings and ultimately, salvation to those around us, and He will use our adversity to do it.