We have been bought back. What does this look like? Read on. 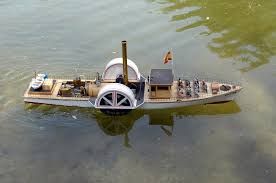 The young boy had spent nearly a whole summer carving, gluing, and painting his toy steamboat. Using the tools his grandfather had given him, he had painstakingly constructed his masterpiece. Every detail was just right. It looked just like the one in the picture. He loved his little craft. It was his pride and Joy. One day while he was playing with it in the creek behind his house, the rains from the previous week had made the current a lot faster than usual. Somehow, the string that kept the craft tethered to his hand had come undone, and the boat was being drawn downstream out of his reach, faster than he could run after it. After a futile chase, it was gone…out of sight, but never out of his mind.

About a month later, while he and his family were walking through town, he spotted his boat in a store window. Excited to get it back, he ran in, telling the shopkeeper that the boat was his and that he’d like it back. The shopkeeper argued that the boat was now his, and if he wanted it, he’d have to buy it like anyone else. After paying the shopkeeper’s price, the boy left the shop with his precious boat under his arm, excited to have it back again. Once outside, he stopped, looked at the boat and said, “I made you, I lost you, I found you, I bought you; you are mine.”

So the Lord Jesus redeems His property from the Adversary (1 Peter 1:18), and of every sinner saved by grace He says, “I created you, I lost you through sin, I found you in your need, I bought you by blood; YOU ARE MINE.”

From the moment Christ came to dwell within us, we became His. His residence implies the right of possession (1 Corinthians 6:20). We are no longer our own. As believers, all that we have and are belong to Him-our bodies, our talents, our time, our money, all that we possess, and our hearts. They are His to display His beauty and glory. Do you remember how the face of Moses shone with the glow of heaven after he had ascended into the mount with God (Exodus 34:29)? We should exhibit the same radiance. A long-faced Christian is a slander on the joy of the lord (Isaiah 12). Victory and joy always go together.

Your eyes become His to exhibit His sympathy and tenderness. He wants to look on the world’s needs through your eyes (John 4:35). True believers should realize this and never lend our eyes to Satan. They belong to the Lord. As I have often said, we must learn to see things from His point of view! When we see through His eyes, the incredible beauty that has been there all the time becomes visible. The reason— “I AM HIS AND HE IS MINE.” Let us yield our eyes to Him. In the vilest sinner we shall see a potential saint. We will not see the log in our brother’s eye without discovering that it is the reflection of the beam in our own (Mt. 7:3). Be careful how you use your eyes. They are His; let Him control your vision (Col. 4:6).

Your Lips become His to speak His messages. The harsh, unkind words remain unspoken. Others will marvel at the “gracious words (Luke 4:22) that come from your mouth—even under provocation (John 7:46). “Never has any man spoken like this Man” was the testimony of our Lord’s enemies, and this is the Man who lives within you. In that ministry to which the Lord has called you, remember that you are only the instrument for the expression of His message. It’s not what you say for Him that counts, but what He says through you (Isaiah 55:11). His words are spirit and life (John 6:63). The word going forth out of His mouth cannot return unto Him void. Remember, your lips are His. Never lend them to Satan. Gossip is unbecoming to your Master.

Your Ears become His ears. They will be sensitive to every cry of spiritual need. The Savior heard the cry of Bartimaeus above the din of the crowd (Mark 10:46), and in selfless compassion He “stood still,” even though the burden of the cross was heavy upon Him. This same Savior lives in you and wants to hear the plaintive cry of the world’s needs through your ears (Psalm 102:20). Tune in to the bleating of the lost sheep the Lord wants to rescue through you. Never lend your ears to Satan (Mark 4:24).

Your Mind becomes His, to think His thoughts. It becomes the very “mind of Christ,” because He thinks through you (Phil. 2:5). “Let this mind be in you which was also in Christ Jesus.” Your intellect becomes His that He may plan through you, in order that you might be an instrument for the realization of His purpose. Yield your mind to Him that you may know His secrets (Psalm 25:14) and be kept in the center of His will. Never lend your mind to Satan.

Your hands are His. Give them up. Allow His full use of them, and He will perform His works through you. Never lend your hands to Satan. Even Christian hands may commit sin if they slip out of the control of the indwelling Christ.

The bottom line: YOU ARE HIS. Allow Him to take full possession. Yield all your members to His control. Then you will have become the bond-slave of Jesus, and all that is His will become yours in an unmistakable way. This is a consecrated life—a life that is completely His.