1261. From Passover to Victory

How Israel’s History Pictures the Believer’s Spiritual Walk. Were are you in the unfolding drama?

From Passover to Victory

(How Israel’s History Pictures the Believer’s Spiritual Walk)
The very first Passover in Egypt, the deliverance at the Red Sea, and the wilderness wanderings by the Children of Israel represent the stages a believer in Jesus Christ must go through before crossing over into a life of victory and rest, just as the Children of Israel crossed the Jordan and final entered the Land of Promise.

The “event” that initiated the process was the result of the tenth and final plague inflicted by God on the Egyptians in which the first-born of man and beast would be slain. The Children of Israel were told to spread the blood of the sacrificed Passover lamb on the doorposts and lintel of their homes. When God carried out His final judgment against the Egyptians, He (by the agency of His death angel) would pass over the homes displaying the blood of the sacrificial lamb. Those living in these homes would be saved (Exod. 12).

The ultimate fulfillment of this-the part that affects us today, occurred 1500 years later when Jesus of Nazareth-Israel’s long-awaited Messiah, became the Passover Lamb for all who would believe in Him. His death on the cross meant that those who trusted in the effects of His own shed blood would be saved and delivered from death just as God’s people were once saved from the death inflicted by the death angel. Having conquered death, as evidenced by His resurrection, Jesus offers eternal life to those who would believe in Him, receiving Him as the believer’s new life.

That first Passover, therefore, represents Christ’s death and resurrection on the cross. It accomplished what neither the Law nor all the ritual animal sacrifices could accomplish. Sin, as well as man’s individual sins, were atoned for by the Lamb of God-the sinless Son of God-the perfect once-for-all sacrifice that satisfied all of God’s righteous demands. All that needed to be done for man’s sins not to be held against him had been done.

This, however, would do man no good unless he was willing to receive what the Son of God was offering-deliverance from sin (the thing that had kept him separated from God) and receive the gift of eternal life-the very life of the resurrected Christ residing in the believer. Jesus Christ has been (and still is) offering this, and so much more, as a free gift. Since man was incapable of removing his own sin, God had to do it for him. The deliverance that comes with salvation is all a result of God’s grace-God doing for us what we don’t deserve.

Just as the Children of Israel were delivered at the Red Sea as God parted the waters, the Christian enters into God’s deliverance as he believes in Jesus (who He is and what He did) and receives Him as his new life. Everything Jesus accomplished on the cross means nothing unless we respond to His offer. The believer’s born-again moment of receiving Christ’s gift becomes our Red Sea experience. It’s all a supernatural work of God. God parted the waters. God’s people simply walked through it. As we begin our spiritual walk, deliverance of every kind has been purchased and has been given to us. (Isaiah 53). All we need to do is “walk it out.” Our Savior has purchased freedom from the bondage of sin and deliverance from everything that would keep us in bondage. We can rest in this as a fact. But will we?

As it turned out, they weren’t ready for a lot of things. It didn’t take the Children of Israel long to forget the miracles God had just done for them. Not just the parting of the waters, but all the plagues God inflicted on the Egyptians for their treatment of God’s people. They complained about bitter water, no water, and the food. Of course, they needed food and water to survive, but the real problem was their rebellion against God and His faithfulness. They were acting as if God had never delivered them or provided for them. They forgot about all He had done and had promised to do.

This set the stage for perhaps their greatest foe to enter the picture-Amalek, father of the Amalekites. Throughout the Old Testament, Amalek represents the flesh-the natural human nature that battles against the Spirit in the lives of believers (Gal. 5:17). Historically, every time God wanted to bring His people to a place of victory resulting in rest and peace, Amalek would show up to block the way. This is why God kept telling His people to obliterate the Amalekites or they would be a perpetual thorn in their sides (1 Sam. 15:1-3).

When the Children of Israel were approaching Mt. Sinai, they came to Rephidim. This is where Moses had to strike the rock to obtain water for the people (Ex. 17:1-7). It is also where Amalek and his army came against Israel (Ex. 17:8-16). When Moses’ hands (holding his staff) grew heavy, Amalek prevailed. When they were held up, Israel prevailed.

What a picture of the believer’s struggle against the flesh! God had clearly shown Himself to be their provider once they crossed the Red Sea (water from a rock, quail, manna, and their shoes and clothes never wearing out). Who shows up? Amalek. In our case, God does something great through us and our flesh wants to take credit, fighting against everything God wants to show His people. In both cases, God is working apart from and in spite of His people, but the flesh refuses to be denied.

Eventually, the believer gets so wearied from the constant battles that he is brought to the very end of Himself. This has been God’s goal all along-to use the tension between the flesh and the spirit to bring the believer through the same frustration that the Apostle Paul explains in Romans 7. 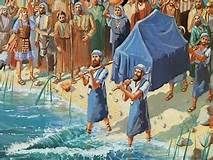 After all the wilderness wanderings had accomplished their purpose, the surviving Israelites were ready to cross over into the Promised Land. This represents the stage when the believer has finally been convinced of his own powerlessness and desires to make a habit of walking in the Spirit. The decision is represented by the crossing of the Jordan River. The victorious Christian life is the life that is spent walking in the Spirit-the very life Paul describes in Romans 8.

For the Israelites, it meant that they were final about to enter the land God had promised to them. The challenge was that fierce and huge warriors were already living there. They had to be destroyed, not because God wanted their land for His people, but because they were so wicked. God wanted to make sure that their vile and disgusting practices could not contaminate the purity that God had placed in His people.

Before they could cross over, they had to consecrate themselves, dedicating themselves to God committing themselves to His exclusive use. With no agenda of their own, God could use them to accomplish amazing things on the other side of the river (Joshua 3:5).

It’s the same for followers of Christ. He cannot use us unless we have been through the same “act of worship.” It’s becoming the living sacrifice of Romans 12:1, the bond-slave of Romans 1:1, and the self-denier of Mark 8:34. For a closer look at what “crossing the Jordan” means check out next week’s “Take that Mountain.”

If all is not lost, where is it?