There once was a day when comedians could be funny without being crude, vulgar, or politically correct.

When Comedy was Funny 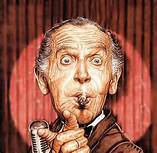 It’s time to lighten things up a little. Most of you won’t remember the old-time Jewish comedians of Vaudeville days – Shecky Green, Red Buttons, Totie Fields, Milton Berle, Henny Youngman, and others. Those of us who grew up listening to them miss their brand of humor. There were no swear words, vulgar innuendos, or political jabs in their comic routines. In those pre-politically correct days, these Jewish comedians made fun of themselves and fellow Jews, and no one got all bent out of shape. They just laughed. If a Jewish comedian told these jokes today, he’d probably be labeled a sexist racist. Here’s a sampling:

A car hit an elderly Jewish man. The paramedic says, “Are you comfortable? ” The man says, “I make a good living.”

I just got back from a pleasure trip. I took my mother-in-law to the airport.

I’ve been in love with the same woman for 49 years. If my wife finds out, she’ll kill me!

Someone stole all my credit cards, but I won’t be reporting it. The thief spends less than my wife did.

We always hold hands. If I let go, she shops.

My Wife was at the beauty shop for two hours. That was only for the estimate. She got a mudpack and looked great for two days. Then the mud fell off.

The Doctor gave a man six months to live. The man couldn’t pay his bill, so the doctor gave him another six months.

The Doctor called Mrs. Cohen saying, “Mrs. Cohen, your check came back.” Mrs. Cohen replied, “So did my arthritis!”

A doctor held a stethoscope up to a man’s chest. The man asks, “Doc, how do I stand? ” The doctor says, “That’s what puzzles me!”

A drunk was in front of a judge. The judge says, “You’ve been brought here for drinking. ” The drunk says, “Okay, let’s get started.”

Why do Jewish divorces cost so much? They’re worth it.

Why do Jewish men die before their wives? They want to.

The Harvard School of Medicine did a study of why Jewish women like Chinese food so much. The study revealed that the reason for this is because Won Ton spelled backward is Not Now.  There is a big controversy on the Jewish view of when life begins. In Jewish tradition, the fetus is not considered viable until it graduates from law school.

Q : Why don’t Jewish mothers drink?
A : Alcohol interferes with their suffering.
Q : Have you seen the newest Jewish-American-Princess horror movie?
A : It’s called, “Debbie Does Dishes.”
Q : Why do Jewish mothers make great parole officers?
A : They never let anyone finish a sentence.

A Jewish man said that when he was growing up, they always had two choices for dinner – Take it or leave it.

A Jewish boy comes home from school and tells his mother he has a part in the play. She asks, “What part is it?” The boy says, “I play the part of the Jewish husband. ” The mother scowls and says, “Go back and tell the teacher you want a speaking part.”

Q : Where does a Jewish husband hide money from his wife?
A : Under the vacuum cleaner.
Q : How many Jewish mothers does it take to change a light bulb?
A : (Sigh) “Don’t bother. I’ll sit in the dark. I don’t want to be a nuisance to anybody.”

Short summary of every Jewish holiday: They tried to kill us, we won, let’s eat.

A Jewish mother gives her son a blue shirt and a brown shirt for his birthday. On the next visit, he wears the brown one.  The mother says, “What’s the matter already? Didn’t you like the blue one?”

Did you hear about the bum who walked up to a Jewish mother on the street and said, “Lady I haven’t eaten in three days.” “Force yourself,” she replied.