1251. Separated unto the Gospel

Spreading the gospel wasn’t optional to the apostle Paul, and it shouldn’t be for believers today either.

Separated unto the Gospel 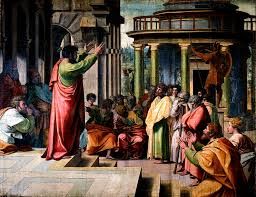 This article is a follow-up to last week’s post, “If I be Lifted Up.” The Apostle Paul had clearly been separated unto the gospel. He had received “the call” and it changed him forever. He knew that he had been separated from his life and everything it contained or meant to him. Those things that once brought him satisfaction were no longer relevant. All his former ambitions were placed on the chopping block. His life was to be totally given over to spreading the gospel.

He also knew that he was entering a different life with a different set of rules. Whereas his former endeavors brought the praises of those around him, his new life would bring pain and heartache. He needed a completely new outlook. Instead of seeking the things that made him feel good, he would have to learn to find joy in his calling, regardless of how it affected his life. Once he came to grips with this, he knew that his consecration was complete. He was completely separated from the world and had given his life to his Lord for His exclusive use. His purpose was to spread the gospel wherever his Master sent him.

n his letters, Paul often presented himself as an example to be followed by his readers. This includes us. We know this to be true, but we fight against it, rationalizing our way through all sorts of convoluted arguments in an attempt to justify our failure to submit completely. Jesus told us to count the cost of following Him. Our problem is that we think the cost is too high. We don’t want to be separated unto the gospel because of what it requires. We want the applause of people, not their condemnation. We want their acceptance, not their rejection. We want our service of God to result in a better life, not a more difficult one.

Then our minds reflect on Jesus when he washed the disciples’ feet. Yet another example to be followed. Servants are focused on those they serve, not themselves. Their satisfaction comes from faithfully fulfilling their master’s wishes. Servants of Jesus Christ will endure hardship and suffering knowing that it brings them closer to their Master, who loves them as only God can. This is how they find Joy, and it comes in the midst of hardship, not after it has been eliminated.

A servant of Jesus Christ will, if required, become a martyr for the sake of the gospel. He will gladly become a living sacrifice because he has learned that all the things that used to matter so much are now rubbish compared to his life in Christ-real life filled with real joy. This comes through his mission of spreading the gospel. The gospel is all about a person-the Son of God, and Paul never believed that God had separated him to show the world what a wonderful man God had caused Paul to become. In the words of Paul, “God has separated me unto the gospel to reveal His Son in me.”

Paul had learned that his consecration was for this specific purpose-to manifest the Son of God in himself. Paul’s unique gospel message was all about the effects of Christ’s death, burial, and resurrection in the lives of those who had been born again. As Christ had become Paul’s life, so He becomes ours when we receive Him. We all have been separated unto the gospel and our mission is to manifest Jesus Christ as we lift Him up in our lives Our greatest joy will be found in fulfilling our mission, and this requires that we refuse to love the things of this word, re-directing our love to the One who provides joy beyond measure simply by agreeing that we, like Paul, have been separated unto the gospel.