You may not have realized that the Sermon on the Mount was for national Israel, not Christians. Now that I have your attention…

Israel’s Sermon on the Mount 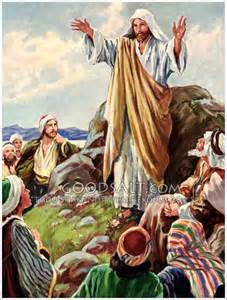 There is an unjustified tendency to assume that because something is in the Bible, it applies directly to us. This is wrong on multiple levels. One is prideful. We think everything is about us. The other is due to a failure to rightly divide the Word of truth. We just don’t want to take the time to learn who the passage or section is addressing. Since roughly 80% of the Bible addresses Israel in some way, the opportunities to mis-apply passages meant only for Israel abound.

Through the years, man has seized every conceivable opportunity to mis-apply Scripture resulting in grave consequences. Jesus’ message known as the Sermon on the Mount is a prime example. This message is included in the book of Matthew, which is addressed to the Jews who were still under the Law. Keep in mind that there was no indwelling Holy Spirit and no identification with Christ’s death and resurrection on the part of those who believed in Jesus. Let that sink in.

If you have read chapters five through seven and felt an uncomfortable disconnect, there’s a good reason for your angst. Once a follower of Jesus Christ learns of the gracious gifts, high position, eternal inheritance and glory that is already his, why would he willingly subject himself to Jesus’ pre-cross law-based message regarding Israel’s future kingdom? Everything in His message has been superseded by Paul’s Church Epistles. Jesus’ Sermon on the Mount is completely devoid of the elements that are distinctly Christian-redemption by the blood of Christ, faith, regeneration, deliverance from judgment, as well as the person and work of the Holy Spirit.
For example, let’s take a brief look at three of the Beatitudes (blessings) at the beginning of Jesus’ message. Remember what this message is all about-the blessings for “the faithful” in the coming Millennial Kingdom when Israel will be living under her New Covenant. These blessings are won through personal merit, a primary characteristic of a law-based society. Grace is not to be found anywhere in this message.

“Blessed are the meek, for they shall inherit the earth” (v. 5). For Christians under grace, meekness is a gift from the Spirit (Gal.5:23), and is never rewarded. While the meek in the kingdom of heaven (Israel’s Millennial Kingdom) will inherit the earth, the believer has an inheritance incorruptible, and undefiled that will never fade away, reserved in heaven” (1 Pet. 1:4).

“Blessed are they which do hunger and thirst after righteousness: for they shall be filled” (v. 6). The Christian may crave a closer walk with the Father; but he has already become the righteousness of God in Christ” (2 Cor.5:21).

Blessed are the merciful: for they shall obtain mercy” (vs. 7). In Israel’s Millennial Kingdom, mercy from God will depend wholly on the exercise of mercy toward others. This is pure law. Under grace, the Christian is urged to be merciful, as one who has already obtained mercy (Titus 3:5).

So, what are Christians to do passages like these? Do we ignore them as being not for us, or is there still something here for us? It seems to me that since this sermon is included in The Gospel according to Matthew, we must discern between Jesus’ gospel message to the Jews of His day, and His descriptions of life in Israel’s Millennial Kingdom. While Jesus was describing life in the coming kingdom, those Jews in the audience should have realized that Israel’s attempts to obey God’s Law had failed miserably, and Jesus’ message that day raised the bar even higher. They should have cried out, “This is too much. We can’t do it!” Jesus would have replied, “You’re absolutely right. This is what I’ve been waiting to hear. I’ve done it all for you. Just come unto Me and be saved.”

These Jews should have realized that the one standing before them was the one spoken of by all the prophets as they testified that forgiveness of sins would come through faith in Jesus Christ (Acts 10:43; Rom. 3:21-25). While Jesus was presenting “life in the kingdom” (for national Israel), He was offering salvation to the individual Jews sitting on that hillside simply by believing in Him. Everything they had desired was standing before them. They could be saved by responding to the same gospel that would be offered to the Gentiles.

The gospel (the message of their Messiah) had always been available to them, but they had their own ideas of what the Messiah would be like. When He came as a suffering servant, they were expecting a conquering king, so they missed Him. Their view of God was also faulty. While He had been drawing them to Himself and His righteousness, they preferred a religion of rules and sought a righteousness of their own. They should have learned that righteousness has always been based on faith, not works (Genesis 15:6; Habakkuk 2:4).

So, here’s what I believe we Christians can learn from studying the Sermon on the Mount. If we set aside the merit-based requirements, what we’re left with is a picture of what will happen in each of us after we have truly become Christ’s bond-slave, having received from our Master a disposition exactly like His. Since Jesus is the only one who can fulfill the Sermon on the Mount, everything within us must be of Him. He is the only one who can love His enemy, go the extra mile, or turn the other cheek with no trace of resentment. He must be our life.

I hope this gives you a new perspective as you seek to understand what God is saying to you through His Word. It certainly has changed the way I approach Scripture.

If you can’t be kind, at least have the decency to be vague.