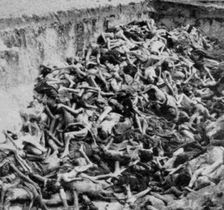 Our world is renewing what appears to be an irrational hatred for Israel and her people. Despite the peace overtures by a few Arab nations, the growing worldwide sentiment is intense hatred, not peace. What is Israel’s response? “Never again!” Ever since the Holocaust, Jews have rallied around this slogan. Never again will they allow such brutality and genocide to be perpetrated against them. Never again will they be too weak to resist. Never again… It’s easy to sympathize with them. We’ve seen the movies, stared at the horrifying pictures, and listened to the stories. We’ve spent time in a Holocaust Museum. It’s hard to imagine how anyone could survive, yet some did. We’re tempted to wonder where God was during those dark years. Why didn’t He step in? Weren’t the Jews His chosen people? How could He let that happen? How could He be so indifferent to their pain and suffering? How could He be so cruel? Many Christians have quietly wondered these things and come up empty. So, how do we reconcile a loving God with such horror?

The obvious place to start is with what we know about God’s character. While we know that He is loving and merciful, we also know that He is just and righteous and, therefore, He must punish sin. We also know that He is a jealous God who doesn’t take kindly when those He loves reject Him and follow after the very things He hates. Such is the history of the Jewish people.

For the people of Israel, it’s always been about deliverance from their problems instead of deliverance from what caused all their problems-their own sin. God had promised to spare them from the very things that came against them if only they would obey and trust Him. He warned the northern ten tribes of Israel. They refused to listen and were carried into captivity by the Assyrians. He warned Judah that a similar fate awaited them if they didn’t change their ways. They refused and spent the next seventy years in Babylon.

While there, the prophet Daniel told them not only when they would be set free, but the exact day their Messiah would reveal Himself (Dan. 9:25). How did they respond? Many chose to stay in Babylon, and they all missed the Messiah when He came. For a brief time, some followed Him because of His miracles, but in the end, they cried, “Crucify Him!” Then came what I believe to be the nail in the coffin. All the people cried,

Not only had they not learned anything from their previous disobedience, now they were taking responsibility for crucifying the very One who claimed to be their promised Messiah. Check out Deut. 18:18-19). Perhaps there’s a direct connection between the Holocaust and these eight simple words. To this day, the “Never Again” slogan misses the point. A U.S. Jewish political action organization that uses civil disobedience to protest against ICE (Immigration and Customs Enforcement) goes by the name “Never Again Action.”

My point, however, isn’t to show how guilty the Jews are. It is to show that Gentiles are no better. In Romans 9-11 Paul says that despite the guilt of his Jewish brethren, God has saved a remnant for Himself from Israel (Rom. 11:5). Gentile believers have been charged with making the Jews jealous of their faith-a faith that was first meant for the Jews. We are to be alert to the Jews God sends our way (or those to whom God sends us). They may be chosen by God to become part of the remnant (Rom. 11:5), but they need to hear the gospel so they can believe (Rom. 10:14). How seriously have we Gentiles taken this calling? Not very.